This page is an historical document and contains content that may be out of date. 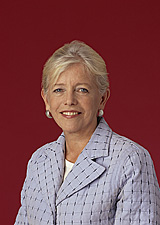 National Institutes of Health (NIH) Director, Elias A. Zerhouni, M.D., has named Josephine P. Briggs, M.D., to be the director of the National Center for Complementary and Alternative Medicine (NCCAM). An accomplished researcher and physician, Dr. Briggs brings a focus on translational research to the study of complementary and alternative medicine (CAM) to help build a fuller understanding of the usefulness and safety of CAM practices that nearly two-thirds of the American public uses.

“We are pleased to have Dr. Briggs return to NIH to lead NCCAM,” said Dr. Zerhouni. “She has been a leader in trans-NIH activities and her in-depth understanding of NIH and translational research will bring new opportunities to the study of CAM.”

“I am honored to be selected to lead NCCAM and welcome the opportunity to develop further the NIH investment in this exciting field of biomedical investigation,” Dr. Briggs said. “Alternative approaches to health and wellness are of enormous public interest, and we need a strong portfolio of science in this area. The NIH has already taken significant steps to build research programs to explore the potential of CAM. I look forward to working with scientists and the CAM community as well as my colleagues across the NIH to strengthen our understanding of the potential of CAM and to examine the opportunities for integration of proven CAM approaches into our Nation’s health care delivery.”

NCCAM has an annual budget of $121 million and supports CAM research at more than 260 institutions throughout the country, funds research training and career development, and provides science-based information to the public and health professionals.

On November 7, 2006, Dr. Zerhouni announced that Stephen E. Straus, M.D., NCCAM’s first Director, who stepped down from his leadership of the Center for health reasons, would become a special advisor to him. At the time of Dr. Straus’ death in May of 2007, Dr. Zerhouni recognized Dr. Straus’ contribution to NCCAM as having articulated “an uncompromising and compelling agenda” for the new Center. In the interim, Dr. Zerhouni named Ruth L. Kirschstein, M.D., formerly the Acting Director of NIH, to be the Acting Director of NCCAM. Dr. Kirschstein has also served as the director of the National Institute of General Medical Sciences and was the first woman to be named an institute director at NIH in 1974. “We are grateful to Dr. Kirschstein, for having provided experienced leadership during this transition,” noted Dr. Zerhouni today.

Dr. Briggs received her A.B. cum laude in biology from Harvard-Radcliffe College and her M.D. from Harvard Medical School. She completed her residency training in internal medicine and nephrology at the Mount Sinai School of Medicine, followed by a research fellowship in physiology at Yale School of Medicine. She was a professor of internal medicine and physiology at the University of Michigan from 1993 to 1997. From 1997 to 2006 she was director of the Division of Kidney, Urologic, and Hematologic Diseases in the National Institute of Diabetes and Digestive and Kidney Diseases. For the last year and a half she has been senior scientific officer at the Howard Hughes Medical Institute.

Dr. Briggs has published more than 125 research articles and is on the editorial boards of numerous journals. She is an elected member of the American Association of Physicians and a fellow of the American Association for the Advancement of Science. She is also a recipient of the Volhard Prize of the German Nephrological Society. Her research interests include the renin-angiotensin system, diabetic nephropathy and the effect of antioxidants in kidney disease.

About the National Center for Complementary and Integrative Health (NCCIH): NCCIH’s mission is to define, through rigorous scientific investigation, the usefulness and safety of complementary and integrative health approaches and their roles in improving health and health care. For additional information, call NCCIH’s Clearinghouse toll free at 1-888-644-6226. Follow us on Twitter, Facebook, and YouTube.

About the National Institutes of Health (NIH): NIH, the nation’s medical research agency, includes 27 Institutes and Centers and is a component of the U.S. Department of Health and Human Services. NIH is the primary federal agency conducting and supporting basic, clinical, and translational medical research, and is investigating the causes, treatments, and cures for both common and rare diseases. For more information about NIH and its programs, visit www.nih.gov.