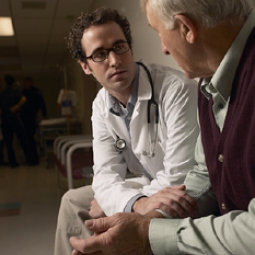 A recent study examining the influence of blood markers of dietary intake (nutrient biomarkers) on brain health showed that specific dietary patterns may help prevent cognitive decline in older people. Previous research has examined only one or a few nutrients, or has relied on food frequency questionnaires, which have identified that higher intakes of green, leafy and cruciferous vegetables, fish, and fruit, but lower intakes of meats, high fat dairy, butter, and trans fatty acids were beneficial for cognitive health. This study, however, examined the blood concentrations of 30 nutrient biomarkers, in specific patterns, to determine the collective effect of nutrient biomarkers on cognitive function. The study was funded in part by NCCAM and published in the journal Neurology.

The researchers examined blood nutrient biomarkers in 104 relatively healthy adults aged 65 years and older (average age was 87 years) who were at risk for dementia. Participants did not have vascular disease, hypertension, or diabetes. Researchers administered several cognitive tests (executive function, memory, attention, language, processing, global function, depression) in all participants and performed magnetic resonance imaging (MRI) scans in 42 participants to determine brain volume in various regions. One goal of the study was to define dietary patterns that promote cognitive health in elders, similar to how scientists have defined dietary patterns that promote cardiovascular health in adults.

Despite these findings, the researchers noted that they cannot claim a causal association between nutrient biomarkers and cognitive health at this time. Provided these findings are confirmed, they point to the need for future studies to determine nutrient combinations that will predict cognitive and brain volume changes in susceptible individuals.