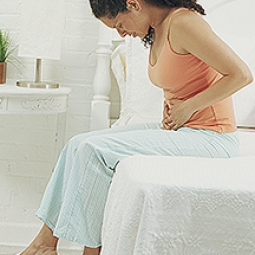 Results of a study supported in part by NCCAM suggest that a brief group therapy intervention—including education, cognitive-behavioral therapy, and basic relaxation techniques—may ease symptoms and improve quality of life in people with irritable bowel syndrome (IBS). The study was conducted by researchers at the University of California, Los Angeles; Columbia University; and Sahlgrenska University Hospital in Gothenburg, Sweden. It was published in Alimentary Pharmacology and Therapeutics.

Sixty-nine adults with diagnosed IBS were randomly assigned to an active-intervention group or a wait-list control group. All participants received chapters from a book on IBS, were contacted at specific times by a study nurse, and continued with usual care. The active intervention was an “IBS class,” co-led by a gastroenterologist and a therapist, that met 2 hours per week for 5 weeks with five to eight participants each. Class topics included the biology of IBS and the stress response; links between the mind, body, emotions, stress, and IBS symptoms; evaluating and responding to symptoms; coping styles; and lifestyle management. They learned two simple relaxation techniques that they practiced outside class, and they also were instructed to monitor and document their symptoms and relate them to mood, possible stressors, and changes in diet.

At the end of the course, the investigators found that class participants showed significant improvements in their IBS symptom severity, visceral sensitivity, quality of life, and depression compared with the wait-list control group. Their coping skills had also improved. Most gains remained at the 3-month followup. Improvements were especially marked in those who had entered the study with a low or moderate quality of life.

The researchers concluded that this brief psychoeducation intervention is feasible, clinically useful, and cost-effective. It could potentially aid not only self-management and coping, but standard drug therapy. Still needed, they noted, are further studies to confirm the results, and ways to make these kinds of promising psychosocial approaches more acceptable and available to people with IBS.