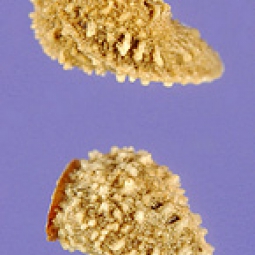 People with high levels of cholesterol often also have high levels of another kind of fat—triglycerides. The connection between high cholesterol and cardiovascular disease risk has long been known; more recently, high triglycerides have also been recognized as a risk factor. Although fish oil is known to reduce triglycerides (through processes involving omega-3 fatty acids), it is difficult for people to eat enough fatty fish to get this benefit. The possibility of deriving a similar benefit from plant-based sources of the omega-3 alpha-linolenic acid (ALA) is limited by the body's inefficient conversion of ALA to eicosapentaenoic acid (EPA). Botanical oils rich in the omega-3 stearidonic acid may offer an alternative.

In light of previous research indicating that one such oil from the seeds of the Echium plantagineum plant can lower triglycerides in people, a recent NCCAM-funded study at the Wake Forest and Harvard Center for Botanical Lipids used an animal model—mice with mildly elevated triglyceride levels—to investigate how echium oil achieves this effect. The researchers fed the mice diets supplemented with either echium oil, fish oil, or (as a control) palm oil. They found that both echium and fish oils had the following effects:

The researchers concluded that echium oil may provide a botanical alternative to fish oil for reducing triglycerides.