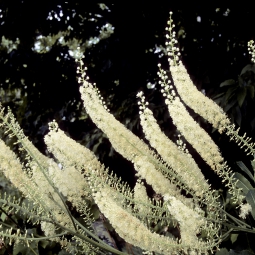 Recent research, supported in part by NCCAM, suggests that the herbs black cohosh (Cimicifuga racemosa) and red clover (Trifolium pretense) are no better than placebo in treating the hot flashes and night sweats that often accompany menopause. The findings were published in the journal Menopause.

Researchers from the University of Illinois at Chicago College of Medicine and Northwestern University Feinberg School of Medicine tested the herbs in women experiencing at least 35 episodes of hot flashes and night sweats per week. Although conventional menopausal hormone therapy can effectively manage these symptoms, health concerns related to such care have increased interest in alternative treatments.

During the year-long investigation, 89 women were randomly assigned to take daily doses of black cohosh (128 mg), red clover (398 mg), placebo, or menopausal hormone therapy. As researchers expected, the most significant effects were seen in the women who took menopausal hormone therapy—the average number of symptoms they experienced per week fell by 94 percent. Women given placebo experienced a symptom decline of 63 percent (much higher than expected). Those who took red clover showed a decline of 57 percent—similar to placebo—while women who took black cohosh reduced the number of symptoms they experienced by only 34 percent. Symptom intensity among all groups was similar—however, at 6 and 9 months, women receiving black cohosh reported higher symptom intensity than women receiving placebo.