A Link Between Omega-6 and Chronic Disease—Does Ancestry Play a Role? 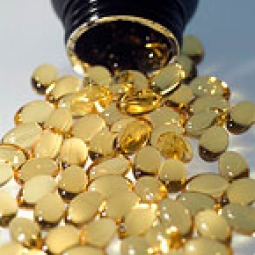 A population's ancestral background may affect how omega-6 fatty acids are processed and used by the body, according to a 2011 study funded in part by NCCAM. Omega-6 fatty acids—also known as n-6 polyunsaturated fatty acids (PUFAs)—are important for maintaining proper cellular function in the human body and, in particular, play a role in immunity and inflammation. Omega-6 fatty acids, found in foods such as margarine and vegetable oils, differ from omega-3 fatty acids, which are found in fatty fish.

Researchers at Wake Forest University, The Johns Hopkins University, and The University of Chicago studied DNA and blood samples in African Americans and European Americans to see if human ancestry affects how omega-6 fatty acids are metabolized in the body. The researchers showed that a segment of DNA, known as a fatty acid desaturase (FADS) cluster, is responsible for the efficient conversion of dietary medium chain omega-6 fatty acids to long chain omega-6 fatty acids, such as arachidonic acid, which then have the potential to increase inflammation in the body. The researchers found that African Americans may have higher levels of arachidonic acid in their blood due to a genetic variation in the FADS cluster, which is much more prevalent among populations of African descent than European descent. This study builds on previous research that has shown that genetic variations may be associated with an increase of arachidonic acid in the blood, as well as inflammation and other inflammatory disorders.

The researchers concluded that this genetic difference, in addition to a diet that is high in medium chain omega-6 fatty acids, may contribute to the chronic diseases prevalent within the African American population. Further studies are necessary to better understand the genetics that influence omega-6 fatty acid pathways. The results of this study emphasize the importance of tailoring dietary recommendations to a specific population.