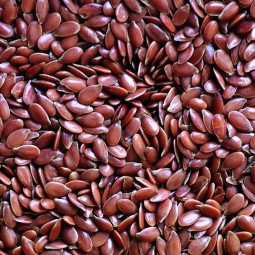 Flaxseed is rich in alpha linolenic acid (ALA), a plant-based omega-3 fatty acid, as well as fiber and lignans (phytoestrogens), making it a possible functional food for reducing cardiovascular risk factors. A double blind, randomized, controlled clinical trial by researchers at the University of Pennsylvania Health System explored the effects of flaxseed on various cardiovascular risk factors in adults.

The study included 62 men and post-menopausal women between the ages of 44 and 75 years. During the 10-week trial, participants consumed either 40 grams a day of whole yellow omega flaxseed ground into powder that was added to baked products or a matching wheat bran product. Participants also followed a low-fat, low-cholesterol diet.

Researchers found flaxseed positively affected lipoprotein A (Lp(a)) and insulin sensitivity. They also found a modest but short-lived lowering effect in participants' LDL (“bad”) cholesterol levels. However, the researchers also noted that flaxseed significantly lowers HDL (“good”) cholesterol levels in men, although not in women. There were no changes noted in markers of inflammation or oxidative stress. The flaxseed preparations were well tolerated by participants.

This trial is the second largest flaxseed trial reported to date, and the largest to include men. The authors suggest that additional investigation of the HDL lowering effect among men may be warranted.