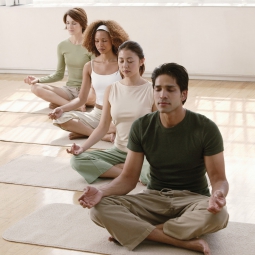 According to a recent study, exercising or practicing meditation may be effective in reducing acute respiratory infections. Acute respiratory infections, which are caused by influenza and other viruses, are very common illnesses and account for millions of doctor visits and lost school and work days each year. Previous research has suggested that enhancing general physical and mental health may offer protection against these illnesses. Findings from this NCCAM-funded study were published in the journal Annals of Family Medicine.

Researchers from the University of Wisconsin-Madison randomly assigned 154 people, aged 50 and older, to one of three groups: a mindfulness meditation group, an exercise group, or a wait-list control group. Participants in the meditation group received training in mindfulness-based stress reduction (a type of meditation based on the idea that an increased awareness of physical, emotional, and cognitive manifestations of stress may lead to a healthier mind-body response to stress). Participants in the exercise group received instruction and practiced moderately intensive exercise (using stationary bicycles, treadmills, and other equipment) during group sessions, and walked briskly or jogged for home exercise. Both interventions lasted 8 weeks, consisting of 2.5-hour group sessions each week and 45 minutes of daily at-home practice.

The severity of each acute respiratory infection that occurred during the study was assessed through a participant survey. In addition, a nasal wash was collected within 3 days of participants experiencing symptoms and analyzed for specific indicators, some of which are linked to the severity of symptoms. Participants answered questionnaires assessing psychosocial measures that could potentially explain links between behavioral interventions and acute respiratory illness outcomes. They also reported any visits to health care facilities or missed work or school activities.

The researchers observed substantial reductions in acute respiratory illness among those in the exercise group, and even greater benefits among those in the meditation group. While not all of the observed benefits were statistically significant, the researchers noted that the magnitude of the observed reductions in illness was clinically significant. They also found that compared to the control group, there were 48 percent fewer days of work missed due to acute respiratory infections in the exercise group, and 76 percent fewer in the meditation group. Researchers stated that these findings are especially noteworthy because apart from hand-washing, no acute respiratory infection prevention strategies have previously been proven. The researchers concluded that future studies are needed to confirm these findings.