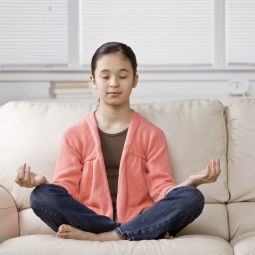 Results of a recent pilot study suggest that middle school-aged students who meditated during a 6-week, classroom-based mindfulness meditation program were significantly less likely than non-meditators to develop suicidal thoughts or self-harming thoughts or behaviors. The study also found that both mindfulness meditation and a matched activity condition showed improvements in internalizing problems, externalizing problems, attention problems, and affect, but there were no statistically significant differences between the groups. Findings from the study, co-funded by NCCAM, were published in the Journal of School Psychology.

A total of 100 sixth graders were randomly assigned to an Asian history class with daily mindfulness practice or an African history class with a matched activity (control group) that involved constructing a life-sized model of a Pharaoh’s coffin. During the study, the teacher in the meditation group led students in silent meditation at the beginning of the class. The initial meditation periods lasted 3 minutes, and the final meditation periods lasted up to 12 minutes. Participants learned breath awareness and breath counting, labeling of body sensations, labeling of thoughts and emotions, and body sweeps. During the final 2 weeks, students could choose any of the various meditation techniques. Participants completed questionnaires before and after the 6-week study period.

Although the children in the meditation group had a reduced risk of developing suicidal thoughts and thoughts of self-harm compared with the control group, the researchers noted that the small sample size and limited followup make it difficult to conclude that these effects were due to meditation. They suggested further research with a larger sample to determine the extent to which meditation can produce long-term beneficial effects.