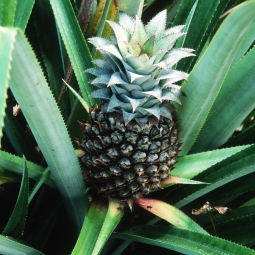 Previous research indicates that bromelain—an enzyme extracted from pineapple stems—may help inflammatory conditions such as allergic airway disease. Bromelain's anti-inflammatory effects have been attributed to its ability to alter the activation and expansion of the immune system's CD4+ T cells (a type of lymphocyte). To better understand the processes involved, NCCAM-funded researchers at the University of Connecticut conducted in vitro experiments with mouse cells, using bromelain derived from a commercially available, quality-tested product.

The study was designed to determine the effect of bromelain on the activation of CD4+ T cells, specifically on the expression of CD25 (a protein involved in inflammation) on the surface of the T cells. The results show that bromelain reduces CD25 expression via proteolytic (enzymatic) action, in a dose- and time-dependent manner. The researchers' analysis of the mechanism involved found that bromelain apparently splits CD25 from the CD4+ T cells, and that the T cells remain functional—i.e., they can still divide—after bromelain treatment.

The researchers concluded that the novel mechanism of action demonstrated in their experiment explains how bromelain may exert its therapeutic benefits in inflammatory conditions.