Spinal Manipulation’s Effects May Go Beyond Those of Placebo or Expectation, Study Finds 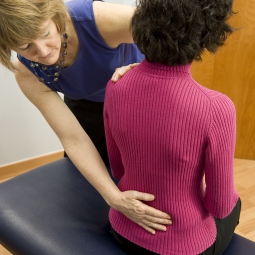 A recent clinical trial has added to knowledge about what goes on in the body and brain when people with chronic low-back pain receive spinal manipulation (also known as spinal manipulative therapy). The researchers found that spinal manipulation, compared with placebo and no treatment, significantly reduced pain sensitivity. They also reported there was support for a potential biological target to address central sensitization of pain, a phenomenon of heightened pain sensitivity that is linked with acute pain’s transition to chronic pain, and the persistence of chronic pain. The research, supported in part by NCCAM and the National Center for Medical Rehabilitation Research, part of the National Institute of Child Health and Human Development, appeared in The Journal of Pain.

The researchers noted that areas for further study include whether the observed effects occur in acute low-back pain. They also suggested adding instruction to actual spinal manipulation to state that the therapy has been shown to significantly reduce low-back pain in some people.