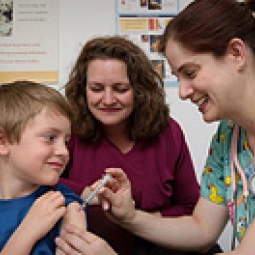 Children in Washington State who receive care from complementary and alternative medicine (CAM) providers are less likely to receive recommended pediatric immunizations and are more likely to be diagnosed with a vaccine-preventable disease. This is according to a study funded by NCCAM and published in the Maternal and Child Health Journal. Previous research has shown an association between parents who use and support CAM therapies and opposition to childhood vaccinations.

Researchers from the University of Washington and the University of Missouri-Kansas City analyzed insurance claims and enrollment data in Washington State from 2000 to 2003. The researchers analyzed two subsets of the data. In the first, they correlated provider-based CAM use with vaccinations in 11,144 children ages 1 to 2 years. CAM services were provided by chiropractors, naturopaths, acupuncturists, or massage therapists.

The second aspect of the study focused on the relationship between CAM use and the diagnosis of a vaccine-preventable disease. The researchers examined family insurance records of 213,884 children ages 1 to 17 years. More than 7 percent of the children received care from a CAM provider, most commonly a chiropractor, and approximately 30 percent had family members who used CAM providers. Children who saw a CAM provider were more likely to be diagnosed with a vaccine-preventable disease than than those who saw only a conventional provider; the percentage of those diagnosed was low (about 1 percent)—and most diagnoses (85 percent) involved chickenpox. Use of naturopathy was associated with significantly more vaccine-preventable disease diagnoses than were other CAM therapies.

The researchers noted that although the findings suggest that parents who use CAM providers for their children are less likely to meet recommended pediatric vaccination schedules, the data do not clarify whether the reduced vaccination rates among children who see CAM providers reflect an increased likelihood that vaccine-hesitant parents seek out CAM practitioners, or a direct result of influence of CAM providers on parents’ attitudes and choices. However, the researchers suggest that outreach and promotion of immunization awareness and education as well as intervention strategies with parents and CAM providers may be needed to increase their support for and adherence to recommendations regarding childhood immunizations.