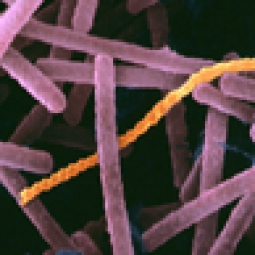 The human microbiome—the name given to the trillions of microorganisms that live in and on our bodies—consists of beneficial and harmful microbes that include bacteria, viruses, fungi, and others. In this study, the researchers purified and solved the structure of a thiopeptide antibiotic (lactocillin) produced by Lactobacillus bacteria that make up part of the vaginal microbial community. Thiopeptides are a relatively new class of antibiotics that have previously been found in organisms that inhabit the soil and the seas.

The researchers also determined that lactocillin had an activity profile similar to that of other thiopeptides (which are active against Gram-positive, but not Gram-negative, bacteria), with activity against Staphylococcus aureus, Enterococcus faecalis, and Corynebacterium aurimucosum, all of which can cause illness, but not against Escherichia coli. Lactocillin was inactive against other Lactobacillus species (suggesting that over time these bacteria had become resistant to the compound).

Using an algorithm called ClusterFinder, the researchers identified 3,118 distinct bacterial gene clusters (BGCs) from various parts of the human body. These BGCs, the researchers said, represent the DNA blueprint for production of microbial natural products, and provide a template for future experimental efforts to discover biologically active small molecules from the microbiome. These molecules represent a promising starting point for studying microbe–host interactions at the level of molecular mechanisms and represent a potentially rich source of therapeutics.

Learning how BGCs in the human microbiome function holds great promise for understanding microbe–host and microbe–microbe interactions, the researchers concluded.