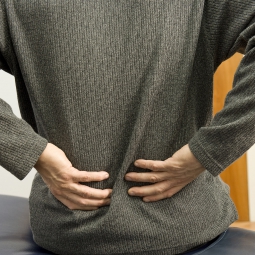 Findings from the largest and most rigorous, randomized dose-response study of spinal manipulative therapy (SMT) for chronic low-back pain suggest that 12 sessions (SMT) may be the best “dose” for people with chronic low-back pain. The study, published in The Spine Journal, was funded by NCCAM.

Spinal manipulative therapy, most commonly performed by licensed clinicians (such as chiropractors, osteopathic physicians, and physical therapists), involves the use of hands or a device to apply a controlled force to a joint of the spine. Current clinical practice guidelines include use of SMT for chronic low-back pain, but average optimal dose has not previously been scientifically established.

This randomized, controlled trial enrolled 400 adults with nonspecific chronic low-back pain over a 4-year period. All participants received a total of 18 study visits over 6 weeks (i.e., 3 times a week for 6 weeks), but to assess the dose-response to SMT, participants were randomly assigned to one of four groups that received either 0, 6, 12, or 18 sessions of SMT provided by study chiropractors. At sessions where participants did not receive SMT, they received light massage, which was considered an “active control” (meaning that it was expected to provide some, albeit small, benefit). Each session lasted at total of 15 minutes with 5 minutes for the SMT or light massage, 5 minutes of heat application, and 5 minutes of low-dose, pulsed ultrasound. The effects of the treatments on self-report of pain intensity and functional disability were evaluated at 6, 12, 18, 24, 39, and 52 weeks.

Participants were highly adherent to the treatment regimens for their assigned groups, and follow-up data was available for analysis on over 95 percent of participants. All four groups had significant reductions in pain intensity and functional disability by 6 weeks, with the largest reduction occurring at 12 weeks in the group that had received 12 sessions of SMT. These improvements were sustained out to 52 weeks, and the effects of dose were significant, though modest, on both pain intensity and disability. The authors concluded that, with respect to SMT for chronic low-back pain, 12 sessions appear to be the most favorable dose. However, they also caution that the differences among dose groups were small.