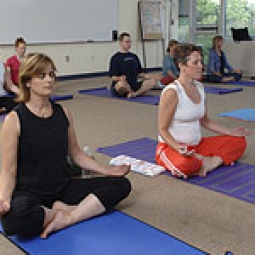 Results of a recent study cofunded by NCCAM suggest that one day of intense mindfulness by experienced meditators led to biological changes including expression of certain genes that play roles in inflammation and pain. Anti-inflammatory and pain-relieving drugs have similar effects on these genes. Findings from the study appear in the journal Psychoneuroendocrinology.

Mindfulness meditation practices are a form of training that focuses attention on breathing to develop increased awareness of the present. The study, conducted in 40 participants, focused on gaining more knowledge about molecular and genetic effects of this type of meditation and also on testing the feasibility of the study approach for future work.

Researchers divided participants into two groups. The first (active) group, which consisted of 19 people who had practiced daily meditation for at least 3 years, performed 8 hours of intensive mindfulness practice during one day. The other group, a control group of 21 people who had no experience with meditation, spent 8 hours performing quiet leisure activities in the same setting as the meditators. The researchers took blood samples before and after both interventions and analyzed them for certain biological factors, including the expression of various genes important in the regulatory processes for inflammation, circadian rhythms (which refer to the body’s internal “clock”), or histones (proteins in cells that attach to DNA). Researchers also took samples of participants’ saliva to determine the levels of the hormone cortisol as an indicator of recovery time after participants took a test that put them under acute stress.

The investigators found no significant differences between the active and control groups in these biological factors at the study’s start. However, after the interventions, the meditators showed some changes not seen in the control group. These included reduced expression levels of certain genes related to inflammation and histones. The reduced levels for two of these genes were associated with faster recovery from the stress test. No significant differences occurred between groups with respect to circadian genes.

The researchers suggested that their findings may offer a possible mechanism for explaining beneficial effects from meditation on inflammatory disorders, and an avenue for future research in chronic inflammatory conditions.