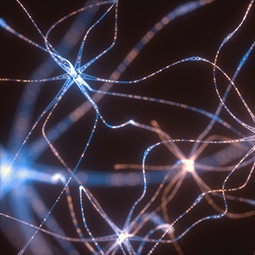 Pain signals may travel as speedily as touch signals in human peripheral nerves that have a thick layer of myelin, according to new research conducted by an international collaborative of scientists and funded in part by the National Center for Complementary and Integrative Health (NCCIH, part of the National Institutes of Health [NIH]). The research, conducted by scientists at Linköping University (Sweden), Liverpool John Moores University (UK), and the NIH, was published in a recent issue of the journal Science Advances.

The new finding challenges the traditional view that pain signals travel via slower nerves that are covered by only a thin layer of protective myelin or none at all.

The researchers used a technique called microneurography to record nerve activity from single nerve cells. Their investigations showed that humans have ultrafast “pain” nerves (nociceptors) that signal as fast as touch nerves that have a thick layer of myelin. Further, testing in patient groups with rare neurological deficits corroborated the role of this system in pain perception.

The researchers also found that one of the patient groups had a response to mechanical pain despite a loss-of-function mutation in the PIEZO2 ion channel. This finding suggests that this channel, which was investigated in previous NCCIH research, is not required for the ability to sense pain in humans.

The ultrafast pain system is known to exist in other mammals, but this is the first time it has been identified in humans, and the discovery has implications for understanding nociception (detection of damaging or potentially damaging stimuli) and pain. The new findings regarding PIEZO2 add to the understanding of this protein’s role in detecting sensations.