Menopausal Symptoms and Complementary Health Practices:
What the Science Says 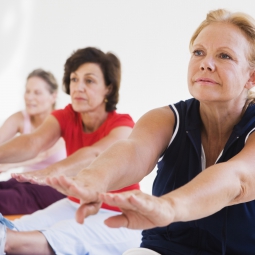 Studies of phytoestrogens such as the isoflavones found in soy and red clover have had inconsistent results on relieving menopausal symptoms. Clinical practice guidelines issued in 2011 by the American Association of Clinical Endocrinologists for the diagnosis and management of menopause state that phytoestrogens, including soy-derived isoflavonoids, result in inconsistent relief of symptoms. The guidelines advise that women with a personal or strong family history of hormone-dependent cancers, thromboembolic events, or cardiovascular events should not use soy-based therapies. Likewise, guidelines from the American College of Obstetricians and Gynecologists state that phytoestrogens and herbal supplements have not been shown to be useful for treating hot flashes.

Research suggests that there is overall insufficient evidence to support the use of black cohosh for menopausal symptoms.

DHEA is a naturally occurring substance that is changed in the body to the hormones estrogen and testosterone. DHEA is manufactured and sold as a dietary supplement. A few small studies have suggested that DHEA might possibly have some benefit for hot flashes and decreased sexual arousal, although small randomized controlled trials have shown no benefit.

There is some evidence suggesting that clinical hypnotherapy and mindfulness meditation may help improve certain menopausal symptoms such as hot flashes. A 2015 position paper from the North American Menopause Society recommends hypnotherapy for managing hot flashes but acknowledges that any favorable evidence is limited.

There is insufficient evidence to determine whether acupuncture is effective for managing symptoms of menopause.

There is insufficient evidence to determine whether yoga has a beneficial effect on menopausal symptoms.