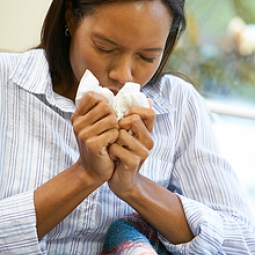 Previous research has shown that people who are under chronic stress are more likely to catch colds. Now, new research, partially supported by NCCAM, has identified a mechanism that may help explain why stress increases your chances of getting sick. The new research used data from two studies in which healthy volunteers were deliberately exposed to viruses that cause colds. After exposure, they were monitored for changes in the inflammatory response—a natural response that helps to fight infection but also plays a role in causing cold symptoms. The researchers were especially interested in a measure of how well immune cells respond to a signal that stops the inflammatory response. This measure is called glucocorticoid receptor resistance or GCR. When GCR is increased, people’s immune cells don’t respond as well as they should to glucocorticoid hormones, which turn off inflammation. Therefore, the inflammatory response may be stronger and last longer than usual. In the first study, 276 participants were interviewed to find out whether they had experienced chronic stress (prolonged stressful life events) during the past year. Those who had experienced chronic stress had greater GCR, and those with greater GCR were more likely to develop colds after they were exposed to cold viruses. In the second study, 79 participants were assessed for GCR before being exposed to the virus; after they were infected, they were monitored for the amount of cytokines (inflammation-inducing chemical messengers) they produced. Cytokines cause most cold symptoms. The researchers found that participants with higher GCR before exposure to the virus produced more cytokines after infection. The results of the two studies, considered together, indicate that the effects of chronic stress on the body’s ability to regulate inflammation can make people more susceptible to colds. They also show that GCR is involved in this relationship. The researchers who conducted these studies explained that their findings may not just be relevant to colds. The inflammatory response plays an important role in a range of diseases, including asthma, cardiovascular disease, and autoimmune disorders. Therefore, the effects seen in these studies may have broad implications for understanding how stress affects health.