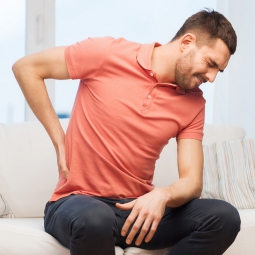 For adults with chronic low-back pain, two mind and body practices―mindfulness based stress reduction (MBSR) and cognitive-behavioral therapy (CBT)―resulted in greater improvement in pain and functional limitation compared to usual care. The randomized study, which was funded by NCCIH and conducted in the Group Health Cooperative system in Washington State and the University of Washington, appears in the Journal of the American Medical Association.

The researchers tested MBSR (described as training in mindfulness meditation and yoga) against CBT (training to change pain-related thoughts and behaviors) and usual care. Participants randomized to the usual care group received a nominal payment but no MBSR or CBT, and were free to seek whatever other treatment they desired. The participants were 342 adults aged 20 to 70 who had chronic low-back pain not associated with a specific diagnosis such as spinal stenosis.

After initial assessment, participants were randomized to MBSR, CBT, or usual care. In the two mind and body groups, treatments consisted of one 2-hour session per week for 8 weeks, plus home practice with workbooks and CDs.

The researchers found that participants in the MBSR and CBT groups had greater improvement in functional limitation and back pain at 26 and 52 weeks compared with those who had usual care. There were no significant differences in outcomes between MBSR and CBT. The moderately-sized treatment effects were apparent even though participants in the mind and body groups did not attend all of the sessions. In addition, the researchers observed that participants in the MSBR and CBT groups improved more than those in the usual care group on pain intensity and some mental-health measures, although for the latter, improvement did not extend beyond 26 weeks.

Of the several limitations of this study, the researchers noted that about 20 percent of participants randomized to MBSR and CBT were lost to followup; the researchers used statistical imputations to address the missing data. The researchers concluded that MBSR may be an effective treatment option for people with chronic low-back pain. They also suggested that, based upon an array of evidence, such mind and body practices may give people ongoing skills to help them manage their pain. Areas for further study include MBSR’s cost-effectiveness, the mechanisms by which it exerts its effects, whether those effects persist beyond a year, and the optimal number of sessions.

In February 2017, the researchers provided an update from this study’s 2-year followup point in the Journal of the American Medical Association. Eighty-one percent of the participants had provided them with 2-year outcome data. With respect to function, at 2 years compared with baseline (i.e., the study’s start), the CBT group showed a greater—although modest—improvement compared to the usual care group. Otherwise there were no statistical differences between groups. The authors noted that this CBT finding fits with earlier evidence that CBT-based treatments’ effects on chronic low-back pain persist for at least 2 years. Also concerning function, mean improvements within each group stayed about the same from baseline to 2 years. None of the groups saw statistically significant effects from treatment on the bothersomeness of their back pain.

Among the study’s limitations, they added, was that the fewer than 6 out of 10 members of the MBSR and CBT groups attended at least 6 out of their 8 group sessions; followup at 2 years was incomplete; and imputation to adjust for missing data may have minimized study power. The investigators suggest that more research is needed on whether strategies to increase study intervention adherence during the study—or if followup “booster” sessions of these therapies—could sustain benefits longer.