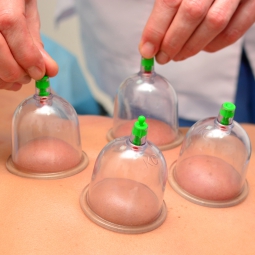 Cupping is a practice used in traditional medicine in several parts of the world, including China and the Middle East. It involves creating suction on the skin using a glass, ceramic, bamboo, or plastic cup. Negative pressure is created in the cup either by applying a flame to the cup to remove oxygen before placing it on the skin or by attaching a suction device to the cup after it is placed on the skin. In “wet cupping,” the skin is pierced, and blood flows into the cup. “Dry cupping” doesn’t involve piercing the skin.