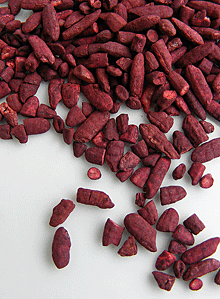 Red yeast rice is a traditional Chinese culinary and medicinal product. In the United States, dietary supplements containing red yeast rice have been marketed to help lower blood levels of cholesterol and related lipids. Red yeast rice products may not be safe; some may have the same side effects as certain cholesterol-lowering drugs, and some may contain a potentially harmful contaminant. This fact sheet provides basic information about red yeast rice, summarizes scientific research on effectiveness and safety, discusses the legal status of red yeast rice, and suggests sources for additional information.

Red yeast rice is made by culturing rice with various strains of the yeast Monascus purpureus. Some preparations of red yeast rice are used in food products in Chinese cuisine, including Peking duck. Others have been sold as dietary supplements to lower blood levels of cholesterol and related lipids.

Some red yeast rice products contain substances called monacolins, which are produced by the yeast. Monacolin K is chemically identical to the active ingredient in the cholesterol-lowering drug lovastatin, which is one of the drugs in the category known as statins. These drugs lower blood cholesterol levels by reducing the production of cholesterol by the liver.

In both 2008 and 2009, the most recent years for which data are available, sales of red yeast rice dietary supplements were approximately $20 million per year. According to the 2007 National Health Interview Survey, which included a comprehensive survey of the use of complementary health approaches by Americans, 2.1 percent of respondents (an estimated 1.8 million Americans) had used complementary health approaches for cholesterol in the past year.

In one of the clinical trials, the tested product produced a cholesterol-lowering effect greater than would be expected based on its monacolin K content. Further investigations, supported by the National Center for Complementary and Integrative Health (NCCIH), suggested that other monacolins or other substances present in the product may have contributed to its cholesterol-lowering effect.

Two studies supported by NCCIH have indicated that some people who had been unable to tolerate statin drugs because of side effects (muscle pain or weakness) were able to tolerate red yeast rice. It is uncertain whether the smaller amount of monacolin K in the red yeast rice products, as compared with the amounts of active ingredients in the drugs, accounted for the greater tolerability or whether other factors were responsible.

In 1998, the FDA determined that a red yeast rice product that contained a substantial amount of monacolin K was an unapproved new drug, not a dietary supplement. On several occasions since then, the FDA has taken action against companies selling red yeast rice products that contain more than trace amounts of monacolin K, warning them that it is against the law to market these products as dietary supplements.

Despite the FDA actions, some red yeast rice products currently on the market in the United States may contain monacolin K. (Some products tested as recently as 2011 have been found to contain it in substantial amounts.) Other products may contain little or none of this component. Consumers have no way of knowing how much monacolin K is present in most red yeast rice products, and therefore have no way of knowing whether a particular product is safe, effective, or legal. The labels on these products usually state only the amount of red yeast rice that they contain, not the amounts of monacolin K or other monacolins.

If You Are Considering Red Yeast Rice

The NHLBI Health Information Center provides information to health professionals, patients, and the public about heart, lung, and blood diseases and sleep disorders and accepts orders for publications.

ODS seeks to strengthen knowledge and understanding of dietary supplements by evaluating scientific information, supporting research, sharing research results, and educating the public. Its resources include publications (such as Dietary Supplements: What You Need to Know), fact sheets on a variety of specific supplement ingredients and products (such as vitamin D and multivitamin/mineral supplements), and the PubMed Dietary Supplement Subset.

NIH Clinical Research Trials and You

RePORTER is a database of information on federally funded scientific and medical research projects being conducted at research institutions.